Even if you do not personally know somebody who suffers from psoriasis, there is a good chance that you have encountered someone who exhibited symptoms of the condition.

The red, scaly skin patches, little red dots, or blisters filled with pus can appear in areas of the body that are difficult to conceal, such as the hands, elbows, or even the face. It’s not only an issue with the way it looks. People will either stare at you or laugh at you or even worse.

Psoriasis affects approximately 7.5 million people in the United States; once it begins, which often occurs between the ages of 15 and 35, it does not go away. Therefore, individuals must learn how to cope with it in many aspects of life, including employment, romantic relationships, and apparel acquisition.

With that said, let’s discuss some of the top things you probably didn’t know about psoriasis.

It is not contagious

The idea that psoriasis can be passed on from one person to another is one of the most widespread psoriasis myths regarding the condition.

Psoriasis is not a contagious ailment; rather, it is an autoimmune disorder in which the immune system does not function as it should.

Psoriasis affects only about 2% to 3% of the population, even though more than 10% of people carry at least one of the genes that cause the condition.

According to several experts, the development of psoriasis may be because of a specific genetic makeup in addition to a set of environmental factors.

The conditions’ triggers vary from one person to another

An eruption of psoriasis can be made worse by stress, which is a typical factor that contributes to health problems. A specific type of flare known as the Koebner phenomenon can be caused by minor injuries such as scratches, sunburn, or even a newly applied tattoo.

In this type of flare, a lengthy lesion emerges near the wound. If you get treatment soon away, you should be able to end these sores quickly.

Psoriasis can be triggered by several different things, including some drugs, illnesses that stimulate the immune system (such as strep throat or bronchitis), and even certain skin conditions.

Poor levels of hygiene do not cause it

A psoriasis flare-up can result from getting a cold or having strep throat, both of which cause the immune system to react and overreact, as well as medications and, on rare occasions, cold weather. It’s also possible for certain people to find that certain foods are the culprits behind their symptoms.

There is no cure for psoriasis currently

At this time, there is no cure available for this illness. Psoriasis is a chronic condition that can last a person’s entire life. However, there are treatment options for the condition.

People now have several options available to them for treating the symptoms and indications of psoriasis due to the development of new options and improvements in therapy. They can also use shampoo for psoriasis to relieve itchiness and redness.

As a result of research into the role that the immune system plays in the development of psoriasis, very effective new biological drugs have been developed that specifically target the crucial immune system components that are responsible for the illness.

It can happen to any part of the body

Psoriasis is an uncertain condition that can develop on any part of the body. However, the scalp, knees, elbows, hands, and feet are the areas that are most commonly affected by the condition.

Psoriasis can also appear on the face. However, this is much less common than the condition appearing in other body parts.

When the disease manifests on the face, it most frequently begins to manifest itself along the hairline, between the eyebrows, and on the skin between the nose and the upper lip. 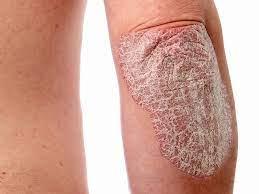 There are different types of psoriasis

Psoriasis skin condition comes in various types, and it is pretty much possible to have more than one type at the same time.